The cost of diagnosing the P1132 2005 NISSAN SENTRA code is 1.0 hour of labor. The auto repair labor rates vary widely across the country, and even within the same city. Most auto repairs shops charge between $75 and $150 per hour.

Swirl control valve consists of actuator and valve. The valve is installed in the intake manifold, and the actuator is connected to the rear end of the valve shaft.
The swirl control valve uses a step motor which has four winding phases. It operates according to the output pulse signal of the Engine Control Module (ECM). Two windings are turned ON and OFF in sequence. Each time an ON pulse is issued, the valve opens or closes. When no change in the control position is needed, the ECM does not issue the pulse signal. A certain voltage signal is issued so that the valve remains at that particular opening. 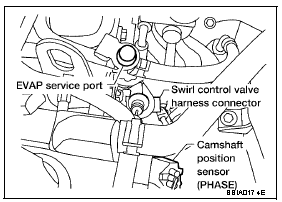 Need more information on how to fix the P1132 2005 NISSAN SENTRA code?
Get Access to Factory Service Manuals