Sometimes and in some models, low battery voltage or a weak starter can trigger a Crankshaft Position Sensor code. Before replacing any parts, recharge or replace the battery.


What does this mean?

The cost of diagnosing the P0335 2009 NISSAN ROGUE code is 1.0 hour of labor. The auto repair labor rates vary widely across the country, and even within the same city. Most auto repairs shops charge between $75 and $150 per hour.

The Crankshaft Position Sensor (CKP) also known as the crank position sensor is an electronic device used in an engine to record the rate at which the crankshaft is spinning. This information is used by the Electronic Control Module(ECM) to control ignition and fuel injection. The sensor system consists of a rotating part, typically a disc, as well as a static part, the actual sensor. 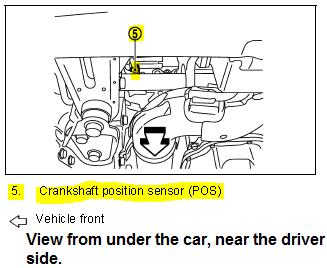 Need more information on how to fix the P0335 2009 NISSAN ROGUE code?
Get Access to Factory Service Manuals