If the Intake Air Temperature (IAT) is part of the Mass Air Flow (MAF) the MAF assembly will need to be replaced to fix the problem.
What does this mean?

The cost of diagnosing the P0127 2003 NISSAN SENTRA code is 1.0 hour of labor. The auto repair labor rates vary widely across the country, and even within the same city. Most auto repairs shops charge between $75 and $150 per hour.

The Intake Air Temperature (IAT) sensor is variable temperature sensitive resistor that measures the temperature of the air in the intake system. Sensor resistance will change based on air temperature. The higher the temperature is, the lower the resistance. The Engine Control Module (ECM) provides a reference voltage and monitors the voltage drop between a fixed value internal resistance and the sensor resistance. This is called a voltage divider circuit.
IAT sensor values are used by the ECM processor to assist with the calculation of idle speed, fuel mixture and spark advance.
Inaccurate voltages from the IAT sensor may affect pulse-width, idle quality, and tail pipe emissions. Intermittent signals may cause hesitation, stumble and surging. If an IAT sensor failure accompanies an Engine Coolant Temperature (ECT) sensor failure, cooling fan operation may also be affected.
Some manufacturers incorporate the Intake Air Temperature (IAT) sensor as part of the Mass Air Flow (MAF) sensor (Air Flow Meter). 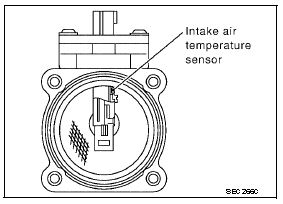 Need more information on how to fix the P0127 2003 NISSAN SENTRA code?
Get Access to Factory Service Manuals